Fill up this form and help me finding out if I should sunset Push4 or not. I’m trying to find out if spending months of my life for an iOS7 rewrite, and lots of time the next years, is a good idea. I don’t want to create a KickStarter campaign about this, and I’m based in France anyway. I just want to see how excited you’d be about this.

If there isn’t enough people willing to pay monthly for such an application, I’ll remove it from the AppStore.

2009, I started working on what is now named Push4 but, at the time, was simply called AppNotifications. An iOS Push Notification application to receive push for Twitter, RSS, Email and even use an API. This app has about 60,000 total users1 and was even listed in the Top 100 Feed & RSS Technologies of 2011.

I’ve always cared about my users, trying to make everyone happy. But running this app is costly (server) and involves a lot of my time. It’s a niche market, and everyone who tried to do something similar failed so far. I feel it’s both because it’s a niche market, and because most users don’t care about paying for such feature. It’s also technically very difficult to implement well2.

The release of iOS7 will make a lot of existing iOS apps at minimum ugly and sometimes even useless. Push4 isn’t immune to this, and require a complete rewrite if I want to keep it live for the upcoming years. The current code includes a client side (the iOS app itself), and a server side. Both now require profound updates, and the client side even requires a complete rewrite for iOS7.

You probably use the app for years, and you’re very aware of how useful it can be for your daily routine. I am very excited about working a complete rewrite, but it’s months of full time work, and unless you are willing to be charged per month for the cost of running servers, there is just no point for me to do it.

Help me finding out about this. Fill up this form and let me know if, based on your current use, you would be willing to have a recurrent monthly payment to keep using it. If enough people are interested about an iOS7 focused version of Push4, I will work full time on it and will fix all existing issues and add features like:

Early screenshot of an iOS7 prototype for Push4 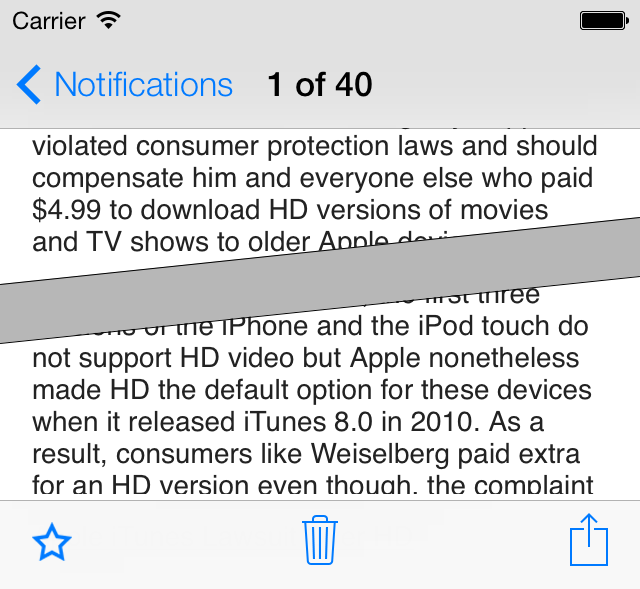 You can stay up to date via my RSS feed.